bottlerockets! what a day for matt! (and me)

About two weeks ago, my son and I had a lock-in at the Knoxville Community Center (the old Gertrude Case Elementary School). Matt, my son, is in scouts now and they held their annual bottlerocket event. A great night of movies and games was followed up by a large breakfast and the launching of homemade bottlerockets. Being new to the whole bottlerocket thing, I slopped a few together not really sure if what I was doing was the slightest bit correct. I had briefly seen the contraption pictured below and still wasn't sure about proper design. I did my best for Matt and even spray painted them. 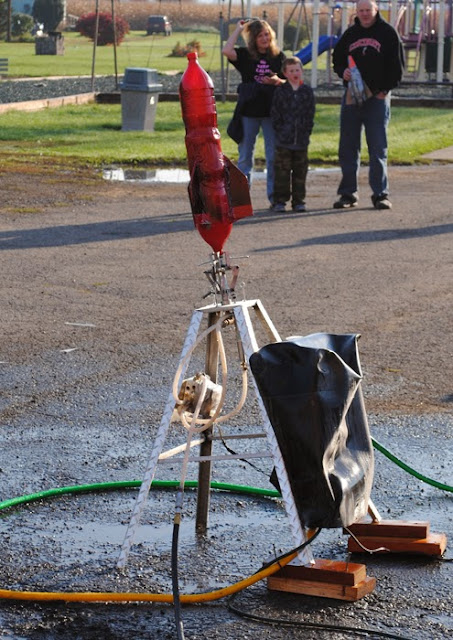 Jason Gehman, the man pictured below on the far right, put about a week's worth of hours into this amazing machine. Mechanical arms clamp above the ring just under the screw-cap. Water is then pumped into the bottle. Air from a compressor is then pushed above the water creating some mighty forces that want to get out. 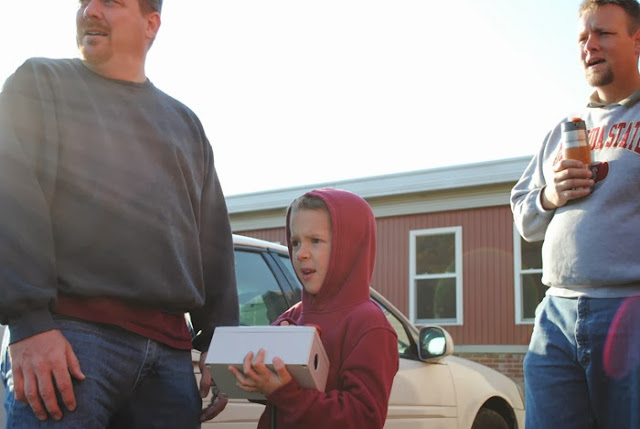 After the kids count down from five, WHOOOOSHHHHH! The clamps are released and the air wants out. The best part is that the young scouts get to control the whole thing. 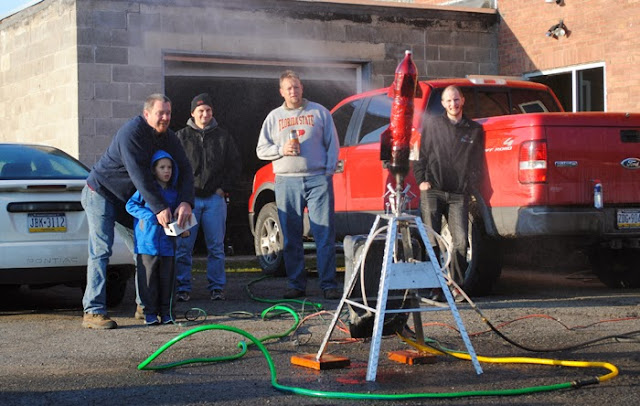 My first rocket failed!. Once the air pressure was applied, water shot out from the many holes created by the hot glue. A novice move indeed! Matt was a bit confused as it wouldn't take off and even more sad that his dad was inept. I was very concerned that I was about to let the boy down. The kind of let-down that he'd remember on his high school graduation day. Luckily, I had a second rocket that I only used duct tape on. 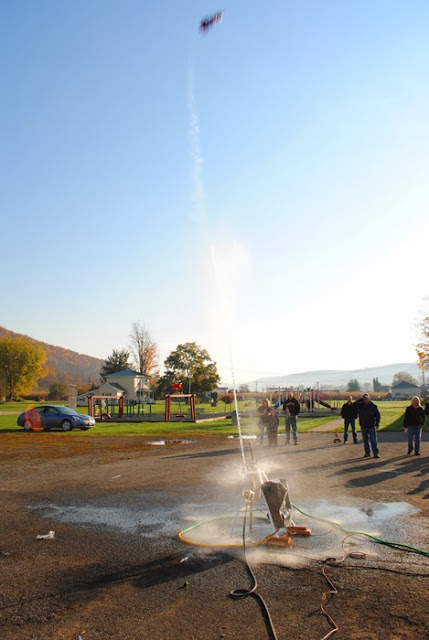 It launched about 40 to 50 ft into the air. Poor design had it curving about 30 ft off the ground (as seen above). It wasn't the best rocket there, but it worked. Some of the rockets just about left our sight. They were designed beautifully and went hundreds of feet in the air. Impressive to say the least. 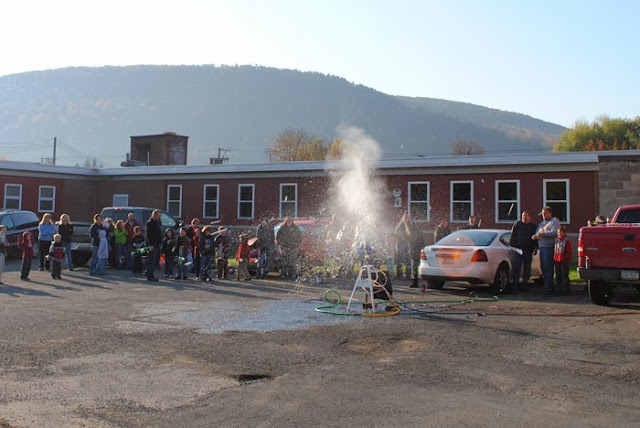 After the first round of launching, Mr. Gehman turned up the air pressure substaintially. Some didn't survive. This lucky shot caught the explosion of one that wasn't so lucky. You can see the plastic shrapnel heading toward the innocent bystanders. Yikes!

Posted by randy mckee at Saturday, October 26, 2013 No comments:

Email ThisBlogThis!Share to TwitterShare to FacebookShare to Pinterest
Labels: family

My son joined Cub Scouts this year. I was able to begin attending on their second meeting. The usual meeting spot for Pack 22 is the gymnasium part of the Knoxville Community Center (formerly Gertrude Case Elementary School in Knoxville, Pa). I used the front entrance on the east side near the gym. Walked in, turned left and was in a modest basketball court with antiquated equipment all about. Upon turning to my right to find my son who had bolted ahead, I was floored by the wall! Yes, I said it, FLOORED BY THE WALL! A monstrous canvas adorned the space protected by a sturdy fence-like cage. It was awesome. Truly awesome. 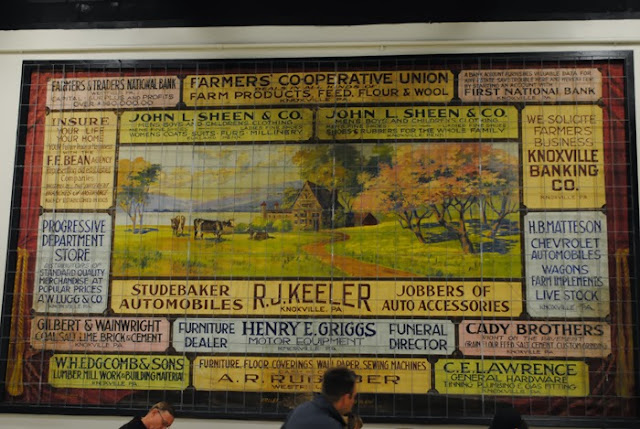 This beast spans about 30 feet wide and about 15 feet high (a rough guess). 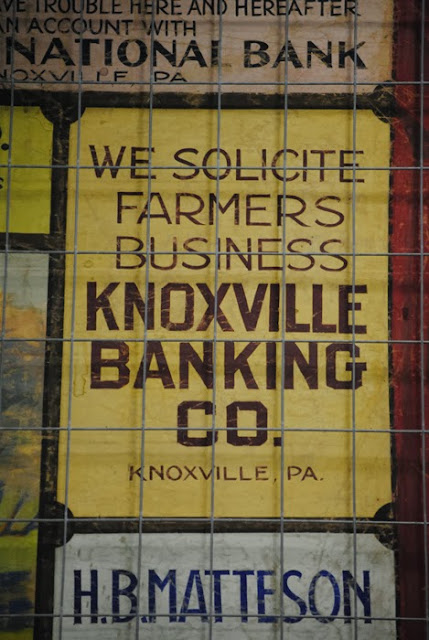 It is a wealth of local history as well as a visual gem for those of us that love lettering as well as painters in general. The landscape below, though I believe is not a local dwelling, is a beautiful painting by itself. 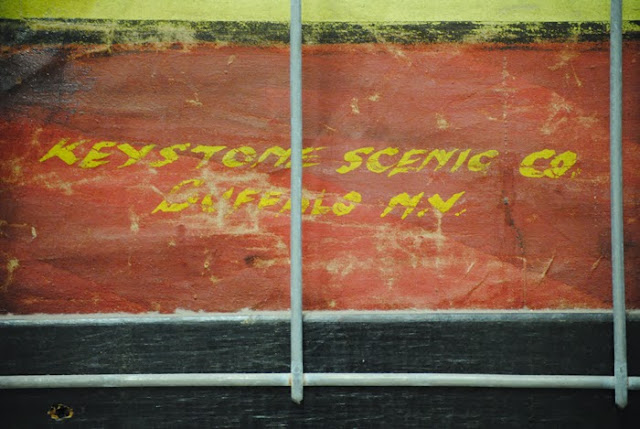 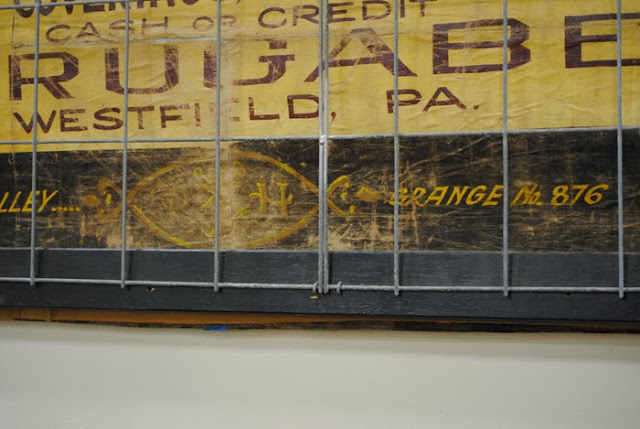 I was told that this canvas might have been used as a curtain/billboard at the Knoxville grange many moons ago (that structure no longer with us). I was unable to find out info regarding the Keystone Scenic Co. and this sign. If anything is known, shoot me a message and I'll post if for all to see. I am very interested and will be on the hunt. If you're ever in Knoxville and the building is open, take a peek! WOW!
Posted by randy mckee at Saturday, October 19, 2013 No comments:

always liked this one

This photo was taken about seven years ago. A run down shop of route 6 in Mainesburg, Pa. That's about all I have to say about it. 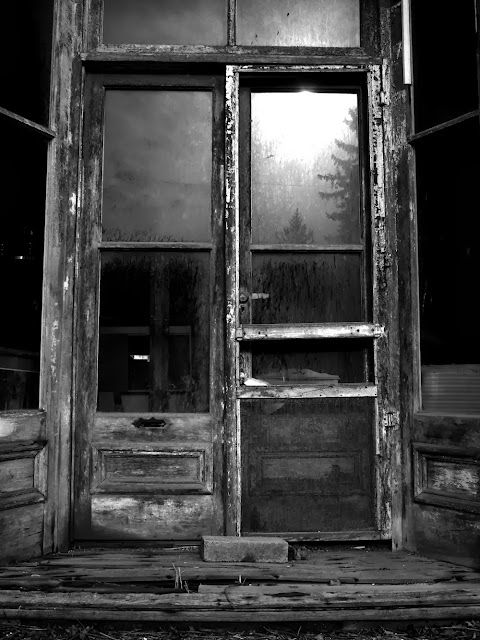