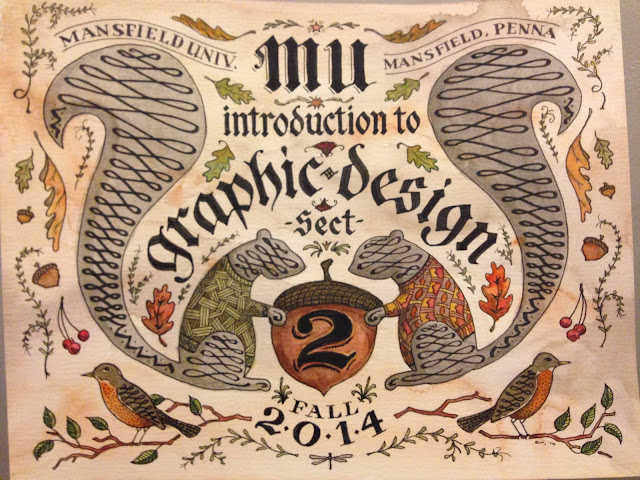 The project was based on the Pennsylvania German/Pennsylvania Dutch Folk Art known as Frakturs....Originating a few centuries ago, they were often family related and very personal pieces made by relatively untrained artists in a simple graphic style. I based mine on teaching at the University level for the first time. The transition was not easy. Sorry that the above image is blurry, but I did not really have the time to scan it in as two halves and try to piece them together. The below images were scanned in. As a Fraktur, the entire composition seems to work well but the intense design flourish within the squirrels was too much...way too much. I would definitely leave the squirrels grey if done again. I left the swirls in as a teachable moment for my students. I did not get around to redoing the project, but there didn't seem to be a point in taking that time. It began as a demonstration of how to handle the project and I guess it will stay that way. Showing students imperfections is just as important as showing them excellence (and NO, this is not just an excuse to go lazy on a possible redo). Students should be able to recognize the flaws in their own work with the same ease as they see it in others. I think if I was considering hanging a finished product in the house, the redo would have been produced with simplified squirrels. 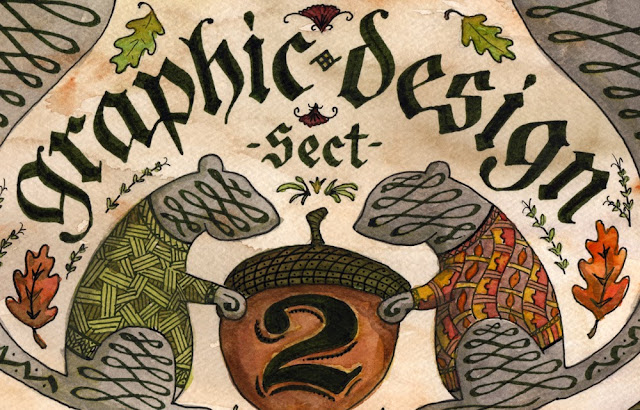 I really liked the sweaters (they were supposed to represent my children) and the type. I regularly and affectionately refer to my children as "squirrel boy" and "squirrel girl". 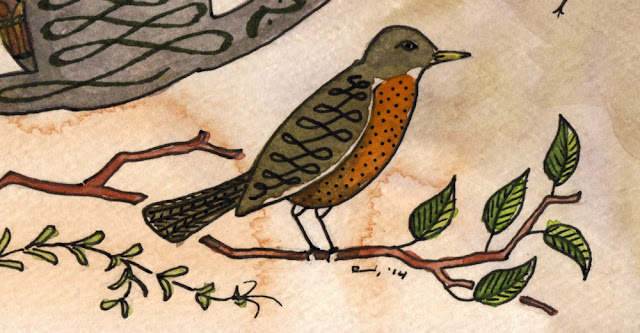 I did some straight forward aging with watercolor and attempted to keep the spacing and the design simplified. I did not try and over-draw anything. The overlapping of objects was purposely minimized and the parts really remain as individual parts.
Posted by randy mckee at Tuesday, May 26, 2015